Posted on 10 September 2017 by Loup Kibiloki

When Mom Possess the Kids

They seem still bathing up to their nostrils in the motherly deluding waters of some kind of “oedipus complex.”  They aren’t grown men, really.

Macron always reminds me of Norman Bates in Hitchcock’s Psycho.

It’s as though they’d been definitely encapsulated in the motherly psycho-biological substance at an early age and they could not get out of it.  And evolve.   Subconsciously, they’re still under the deep infantile influence of their mother.  Immerged in it, so to speak.  Submerged by it.  Prisoner of it.   They  never really emerged from those waters.

These leaders have been, literally, retarded and kept childish.   Infantile.  “Nice.” Devoid of a good sense of reality.  Devoid of it at a certain stage in their psychological growth.

In a sense, they are the pathetic outcome of a hundred years of growing feminist supremacism and its constant, cruel, persistent fatherhood and male bashing.

That boyish gang can’t help dissolving their own nation and civilisation in a sort of undifferentiated moisture.  Because that’s where they are.  Metaphorically, they’re vaginal.  And I don’t think they can help it.

Emmanuel Macron was seduced by his present-day matrone-wife, Brigitte Trogneux, when he was a 15 year old teen.  In 1992.

Trogneux was his teacher [ first I wrote “her teacher” instead of “his teacher”; it sticked there for a while, I didn’t notice at first..).

Brigitte Trogneux was 25 years older than the boy.

Brigitte Trogneux was married to a banker.

She divorced her husband  in 2006.  In 2007, Brigitte Trogneux is married to Inspector of Finances Emmanuel Macron.  In 2008, Macron becomes Investment Banker at Rothschild & Cie.  Fast track..

Or :  From too old a banker to a fresh young one.  Trogneux is likely a classic gold-digger.

The new couple never had children.

( However, in August 2017, the Presidential couple solemnly announced their adoption of a pet dog they named Nemo… [18]  Hum ?  No.  They never adopted a  migrant.  Non mais !  The burden is on you people  :  Fuck you, shut up, take the brunt, get insulted, get humiliated, get raped, killed or looted, say merci, and be nice. )

Brigitte was almost 40 when she got her grip on Emmanuel Macron.  In 1992.  She was almost 25 years older than him.

Brigitte is now 70 years old.  Macron is 40.  The old bitch gives me the creeps.  And I’m not talking about Trogneux’s ridiculous skinny, bony legs:  like many others, I can sense something insane emanating from that woman.

Actually, the couple gives me the creeps.

The whole thing reminds me, somehow, of Hitchcock’s Psycho.

It also reminds me of Sophocles’ King Oedipus  :  the killing of the King by his own son, then the Queen marrying and fucking her own son.

Somehow, the Trogneux-Macron relationship looks like the accomplishment of some sort of “collective freudian prophecy” at the highest level of the State and country :

Oedipus didn’t know the King was his father when he killed him, neither did the King knew it was his son hacking him.  The Queen didn’t  know Oedipus was her son when they both got married after the killing of the King by “that young guy.”  Oedipus didn’t know the Queen was his mother (and when she realised it, she hung herself..).  And then..  The horror story goes on.

A tale of wall-to-wall unconsciousness..

And you know what ?

It’s the same as in Sophocles’ King Oedipus.

The same as for that powerful deep unconscious archetype and complex to which Freud gave the famous appellation of “oedipus complex,” referring to Sophocles’ work.

Brigitte Trogneux doesn’t know she married her son.  (And who can understand that?)  Macron ignores that somehow he symbolically killed his father, the King, and has been having sex with his mother, the Queen, since the age of fifteen.  And they had no children, there’s no father anywhere to be seen..

Again, that’s the point  :   France – and Europe, and the West –  are the theater of a fatherless, hyper-femaloïd, grim, dark tale of suicidal unconsciousness that is growing more and more chaotic and darker. 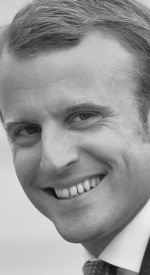 That’s the power of the archetype :  The more people are unconscious of it, more powerful and domineering the archetype’s grip on them.

No unconscious human soul can escape that grip.

Only the Divine soul can keep a human out of any complex or archetype’s powerful grip.  And there’s not one in a million on Earth who naturally lives within the Divine soul’s embrace and dharma.

Entire populations, millions and millions, are presently immerged in a kind of “no one knows” chaotic twilight zone.

But, in a sense, to quote Leonard Cohen, Everybody Knows.  As through some kind of ominous toxic mist.  Or people feel sick, simply, but they don’t know why.  Actually, they’re contaminated by insanity at the highest and lowest levels.

What I write may seem “non-sensical” to some or many, but certain people can sense there’s something ominous behind, under, around, sometimes within themselves, as well as emanating from some people in high places, like the weird Trogneux-Macron couple.  Many dark currents crisscrossing humanity’s collective psyche.

It doesn’t make sense but something in us “sense a sense,” and it sticks, even though we brush it aside or try to do so.

It goes around, it comes around.  It seems that mass of people will end up falling for it.  Falling for what’s emanating.  For good.  Like night flies dancing around the flame.  Then, will it be “too late?”  Masses of unconscious people will have been swallowed up by fire before the riddle can be solved ?

Meanwhile, feminism has accomplished its cycle of contamination, liquefaction, destruction, in France as in Western Europe, indeed in the whole Western World.  Unstoppable, it seems.

Nations die  when fathers are agonising, crushed under feminazi lies, laws, plundering of income, poisonous hubris, female privileges and so on.  Nations die when women, mothers, daughters, are on the loose and have been transformed, for good, into hysterical raving lunatics, feral bitches, repugnant drunken whores.

Patriarchy has been hacked to death and chaos follows.  Naturally.

The present French President’s name could be Emmanuel-Oedipussy Bates-Macron.  With a characteristic smell of dead fish when pronounced.

Norman Bates, Hitchcock Psycho‘s psycho.  Emmanuel-Oedipussy Bates-Macron.  I am Mommy.  And I’m back in the womb of the dead.  Gulped.

There’s psychosis in the air, and a stench of useless overaborting vagina hovering like a deep red mist over France, over Europe.  Over North America.  Over huge areas of the world.

Wait and watch (and prepare yourself, if you understand).  It could become very ugly.  I mean, much more ugly than anything we’ve seen yet.

If not, you will have witnessed a miracle.

After the end, only real men will be able to save what will remain of humanity.  And build something new.  As they always do.

There’s no freedom and no order, they have no chance, without men at the helm, and only men.