Posted on 21 December 2019 by Jacques Renaud

Alexander and the Gordian Knot

[  Shit test:  A usually unconscious but somewhat provocative effort by a woman to test a man’s worthiness.  There can be other ways to define it, but it gives an idea. ]

Shit tests, as I came to see them over the years, are performed by the female to provoke the male in order to see if he can win and dominate over her or not.

The female instinctively seeks an outcome where the male dominates over her.

Otherwise, the female can grow frustrated, even irritated and bitchy, and certainly ends up despising the male she’s trying to provoke.

Most of contemporary feministed-female hysteria, sudden violence, etc, could be described or understood as the result of a constantly frustrated shit test performed by the females on the males, test that most of the males, today, usually unconsciously, or out of sheer political correctness, fail to pass, because of a taboo forbidding them taking up the gauntlet of the shit test.

The Western World countries, mutatis mutandis, live under some kind of Feminist Regime: the taboo just mentionned is the result of a constant, sustained, anti-male feminist brainwashing and repressive social engineering performed on the males.

So the females are constantly asking and demanding for more in a sort of “social shit test” (which is never satisfied) in order to provoke and obtain a rebuke from male strenght and power, but females constantly obtain the opposite from feministed-male submissive infantile behavior.. 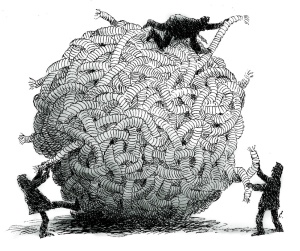 A growing number of males go mgtow, far and free, gradually realizing they do not really need women, certainly not that much: contemporary women are much overvalued  —  and often dangerous too..

Feminism is toxic.  The situation is like a Gordian Knot.  It can’t be loosened, nor untied.  So, what will happen?  Most probably, someday, something like this:

Alexander the Great and the Gordian Knot:

« According to the ancient chronicler Arrian, the impetuous Alexander was instantly “seized with an ardent desire” to untie the Gordian knot. After wrestling with it for a time and finding no success, he stepped back from the mass of gnarled ropes and proclaimed, * “It makes no difference how they are loosed.” He then drew his sword and sliced the knot in half with a single stroke.» —  What was the Gordian Knot ?

For those who want to see or hear what shit tests can look or sound like, some being more or less subtle, some being more or less obvious, — whatever  –, here 25 minutes of it (video at the end) by young self-righteous women who are often arrogant, pretentious, provocative —  and, for that reason, irritated or frustrated, given the fact that none of the three males, all of them good-will guys, good boys, none of them really and definitively take up the gauntlet of the shit tests, shred these women’s shit tests to pieces, and break the gordian knot of the choking politically correct taboo by reducing it to tatters.

Because that’s what normal women want: men who are not afraid of their nonsense and can call their bluff and make their stand.

As for the young men, they have been conditioned to the same kind of ignorance about female nature (and about their’s too) and are under the spell of taboos imposed on speech and male behavior by feminists’ attitudes and propaganda.

That gordian knot, that ties contemporary Western men and women in a more and more depressing, choking hell hole, is there to stay for a time indefinite, for quite a while, maybe for a long time.

Let the feminist neurotic dragon burn itself down to the ground.  It will.  Sure, you can try to do like Alexander the Great if you think you can slay the dragon, — but don’t forget it is forbidden under the present Feminist Regime and it is harshly punished.  But times will change.  They always do :  read Heraclitus.  A time will come.

For the moment, don’t bother too much with females, keep a healthy distance.  I strongly suggest. Don’t fall in their chaotic trappings.

At all event, I salute you, and always will.

For those who can stand that kind of depressive, somewhat sickening stuff, — the following video.  It’s a “correct” decadent, morbid, ritual  ( I admit I didn’t watched the whole depressing colorless, joyless thing):