I mean : literally, not metaphorically.

Sometimes, their names are incredibly explicit, as in RayTheon, which means something like  “Ray Of The Gods ” or “Ray-God” – in French: «Rayon Des Dieux» ou «Rayon-Dieu».

Our civilization is under the yoke of invisible nasty gods in control of the heart, mind, nervous system of officers, employees, judges, governments, multitudes, and their health, life and death.  Or it is some kind of égrégore, some kind of occult, astral conscious “collective aggregation”;  it is built and it is autonomous.  It’s a godlike power. 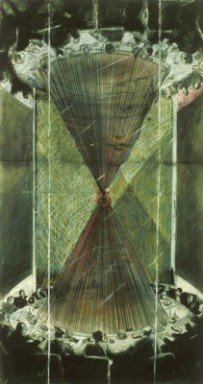 Documentary The Corporation  offers a list of some of the outstanding characteristics  of Corporations in general :

—    callous unconcern for the feelings of others;

—    reckless disregard for the safety of others;

—    deceitfulness : repeated lying and conning others for profit;

—   failure to conform to social norms with respect to ethical behavior… Etc.

And it happens that you will find those characteristics, or “symptoms,” in a psychiatric diagnosis of the personality disorder called psychopathy…

Our civilization is insane – and sanity starts within, right where those nasty gods hold control…

Now, before you go ahead, first things first : smile (no, inner smile, inner…, not like that guy in the White House, or that other one at l’Assemblée Nationale de France, or like any leader in the Canadian Parliament or the Québec Assemblée Nationale, or like whatever Power Icon you can think of, no:  the real McCoy of a smile, inside, inner… It’s your inner bunker, it’s soft but it’s a bunker,  it’s your invisible bunker of strength and softness; some call it dignity, some call it “inner castle”, not “bunker”, some call it immortal soul, it has many facets, it’s very deep and real and the nasty gods can’t touch it, you’ll see.)

A nuclear power plant? No. Or maybe yes? :) This is the Headquarters building of The Bank for International Settlements (La Banque des Règlements Internationaux), Basel (Bâle), Switzerland… The shape of the building is quite striking: that of a nuclear power plant… Trivial or significant?… BIS (BRI) seems to be some kind of “High Priestess Corporation of all Corporations,” or some kind of  “Papesse des Papesses…” BIS is owned by the network of Central Banks; Central Banks are owned or dominated by powerful private banks.

Was there an earthly paradise?  What was it?  Where was it? (Satprem and Mira Alfassa – the Mother)  – Sri Aurobindo : The Intermediate Zone

Invisible Person with Enormous Power: it starts with a “C”, as in “Corporation”, but it doesn’t end there…

Safe-Haven US Currency – surfing on strangeness and naught – a bizarre, satori sort of poem

6 Responses to Invisible Person with Enormous Power. That Deity’s Family Name is “Corporation.”