« There’s probably no God », he says, «stop worrying, enjoy». How many oceans will it take to wash the blood of the murder of God (re : Nietszche)? I don’t know, but the Divine remains omnipresent.. As usual. Strange, indeed. (Carnet de Notes)

Posted on 17 December 2019 by Jacques Renaud

Source of the screen-shot, that video :  Advertising Atheism ( YouTube, no dates, obviously some years ago).

Present post is a comment essentially inspired by the content of the ad (as seen on the screen-shot) which appeared on a bus, somewhere, couple of years ago, in Ottawa or Toronto, Canada.  I stumbled upon the video. 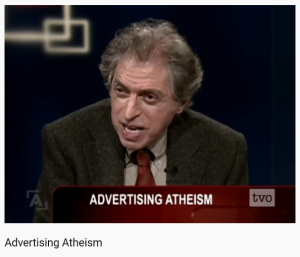 Rob Buchman, who appears in the video,  is the author of « Can we be good without God» :-))  J’ai un léger fourire chaque fois que je lis le titre.

I haven’t read the book, however.  Just the title.  So I’ll comment only the title..  (What would you do?)

The answer to the title is obviously «yes».  As in, for instance:  «Yes, and you can also be good (or bad) without (or with) a million bucks, or just a hat, or a hammer, a toothpick, a cargo of gold, or your mother-in-law (for those who are not yet mgtow).»

Fine, ok, let’s say there’s probably no God (which, btw, could also mean there’s probably one), as the advertisement proclaims (but why advertise it?..).  Anyway.  At all event, I suggest to the advertiser to take action right now: have a good drink, then go on vacation —  and don’t forget to take happiness pills with you in case the humanist in you would need a little boost: never have faith, not even in naught.  Enjoy your life.  No preaching required.

Maybe, dear advertiser, I could suggest you prolong the enjoyment, not wasting your time anymore preaching the total absence of nothing, trying to convert people to your no-creed creed like an inverted imam who failed the madrassa, or like an inverted talmudic nerd who failed in a similar context, and now is preaching the no-creed creed in quest for disciples in order, maybe, maybe, to comfort the deepest unavowed doubts, or troubling concepts he could still carry, or like a kid who’s just discovered that some intellectual concepts are like bubble-gum and can be chewed on to extract their crude aspartamic sugary flavor, and blow bubbles before spitting out the now tasteless lump.

Or probably the Divine simply wants to teach you that It is omnipresent and can be a very merry fellow without showing off.  Nothing to write the whole nation about, really.  Or maybe so?  So I salute the scribe.  I always salute the scribe, implicitly or explicitly.  Scribes are a mysterious species.  Rendez-vous in ten thousand years.

Nietszche wrote, in the 1880s, in The Gay Science :  «God is dead…».  “Gay Science”, as in “Joyful Science”, for instance, or “Joyful Wisdom”, or something similar:  Nietszche had nothing in common with any of the contemporary googloid colorful letters LGBTQetc.  And so do I.

As for that nietszchean «God is dead» just mentioned, atheists usually love it.

They’re enamoured with that short and solemn three-word sentence by one of the major philosophers of the last two centuries or so.  Game over, they think.  Magic Guillotine.  They “forget” too often to quote the rest of the sentence which in no way has anything joyful, or final, or atheistic-leaning or proclaiming.  Stories have an apparent ending only in movies, novels, etc. —  and we often know it, and we’re not fooled.  Real stories prolong themselves, —  in a way, they’re unending.

God has been murdered, actually, says Nietszche, and logically, to me, Dieu being omnipresent, there’s probably blood everywhere (just look around to check).

At all events, Nietszche wrote in his book, Joyful Wisdom:

« God is dead. God remains dead. And we have killed him.

« How shall we comfort ourselves, the murderers of all murderers?

« What was holiest, and mightiest, of all that the world has yet owned, has bled to death under our knives: who will wipe this blood off us?

« What water is there for us to clean ourselves?

« What festivals of atonement, what sacred games shall we have to invent?  —   [ Gay Pride Celebrations, maybe?  MeToo false accusation bacchanals?  Public Scapegoating and tragic celebrations (literally :  “tragedies”)?  Public trials of feminist-abortionists (lots of blood, murder and pedocide there to answer for, it seems)?  Many scapegoats, guilty or not, to come?  (Between the two brackets, these are Loup’s suggestions, not Nietszche’s)]

« Is not the greatness of this deed [the murder of God]  too great for us?

« Must we ourselves not become gods simply to appear worthy of it?»

As for the blood of God, just look around the world — and, or, follow the timeline since the writing of  The Gay Science published in 1882.  Blood everywhere.  Red tsunami growing.  Is there a link?  As for the exponential growth of the red tsunami, I think so.

The immemorial question is always the same old one to me, question born with the human spirit, seed sowed in it by the Divine :  “Why is there something instead of nothing?”  (As in “wake up” or “question more“)

On a depth and quality scale, atheism is far, very, very far down, climbing down far under any of the answers human beings may have received through time when the immemorial question grows and starts poking their mind and spirit, originating from the deepest reach of their psyche  —  that realm, deep, deep down, the chaitya purusha, the sanctuary, not the human soul but the divine one, the light one, the sweet one, the immortal one (Aurobindo’s «psychic», that which gives birth to what he calls «psychic being», the divine child, the divine born, in this world).

We must emphasize that to any question asked on anything, there’s always an answer in a form or an other.   The dividing line between a prayer and a question, I said it elsewhere, is sometimes very thin indeed, and it’s a blessing.  Observe.

So I wonder :  Does atheism really ask questions?..   Or does it know how to ask questions?  Apparently not, methinks.  Or is atheism afraid of any answer?  It seems to me, although I could be partially wrong.  But maybe it could partly explain why the arguments of atheists are so often shallow, almost kid stuff, often funny.

Actually, atheism appears to me as one of the most sterile of all creeds.  Ice Age.

But let’s stop worrying about it.  Anyway.  As the ad suggests.  At least for the moment (hopefully, for ever).

And let’s keep enjoying inner life and the so-called “outer” one.  As I was doing, anyway, before I stumbled upon the ad.

Écrivain.
View all posts by Jacques Renaud →
This entry was posted in Articles and tagged athéïsme, atheism, Dieu, god, Nietszche. Bookmark the permalink.

8 Responses to « There’s probably no God », he says, «stop worrying, enjoy». How many oceans will it take to wash the blood of the murder of God (re : Nietszche)? I don’t know, but the Divine remains omnipresent.. As usual. Strange, indeed. (Carnet de Notes)