Posted on 24 December 2009 by Jacques Renaud 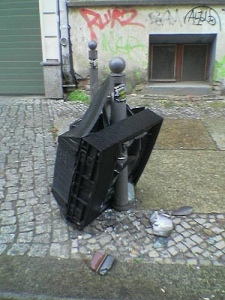 Tv-Set Massacre by agoasi on Flickr under cc license. (Source: click on illustration.) The problem with Tv sets is that they pollute your mind when you turn them on and watch them – and they add to pollution when you trash them. It’s a “damned if you do, damned if you don’t” kind of problem. It’s trash any which way one takes it. As for me, I gave it to someone who… needed one.  Yes, I know…  That invention is both, literally, a pain in the a** and a scourge. There is no way out, it seems, except eliminating the whole stinking gremlin forever through forceful dematerialisation…

For years and years, until February 1998, I watched tv regularly to obtain some information.

Finally, I got rid of the tv set more than twelve years ago. I never regretted it. Believe me, it’s worth it. It’s a lying box. And a deceiving tyrant.

When one turns on the tv set, what it always says implicitly is: “Sit down, shut up and listen.”

And we always, but always, OBEY.

You can zap the thing forever, the obnoxious bully will always deliver the same implicit message. Always. And you will always submit and obey. Always.

Millions of people have submitted themselves to that mind-degrading servitude for decades, and are still doing it with an astounding sense of confidence and duty, while daydreaming and proclaiming pompously that they were – or are – free people enjoying their “godgiven” freedoms. Their godgiven freedoms to submit, to obey, to sit down, to regress, to weaken, to shut up, to listen… to what?…

Usually, to groomed lifted faces with rehearsed studied smiles, to soapy voices and overly paid arnaqueurs who more often than not will  lead people down some brand new garden path, one after an other.

If this is not a patent case of pathetic mass hypnosis, I don’t know what is.

With my best thoughts, however, to all those who still submit to the same slick bully, and still watch him or her with regular fervor, shock, awe or irritation, or are convinced they still must rely on the lying box:  sincerely, after all I’ve said, I can’t judge you.

I kept doing the same silly thing for years.

The Golden Lid or Hiranmaya Patra

Robotics are putting more and more people out of jobs. What will humans do ? An improvised blues.

Was there an earthly paradise?  What was it?  Where was it? (Satprem and Mira Alfassa – the Mother)  – Sri Aurobindo : The Intermediate Zone

Invisible Person with Enormous Power: it starts with a “C”, as in “Corporation”, but it doesn’t end there…

Safe-Haven US Currency – surfing on strangeness and naught – a bizarre, satori sort of poem